SpaceX is making strides in developing its next-generation launcher while exploring the boundaries of reusability with Falcon 9.

Subscribe on iTunes, Google Play, or by RSS for more space exploration discussions. Cover Image: SpaceX has been considering second stage reuse for a better part of a decade. Old designs features heat shields and retropropulsive landings, however the final mechanism may be even more ambitious. Via SpaceX

On April 9th, Elon Musk shared a photo of a large mandrel to be used to manufacture the Big Fucking Spaceship (BFS). This unveil comes along side the confirmation that the Port of LA will be the location of the BFR factory. While BFR is still years away, Elon also teased 2nd stage recovery again, hinting at inflatable ballutes as the key to safely returning the 2nd stage to Earth. This week on SPEXcast, we dive into this developments and give the inside scoop on SpaceX’s recovery efforts.

SpaceX Mars Factory at the Port of LA

When we reported on the potential locations of the carbon composite mandrel for BFS, initial speculation pointed to either Washington or the Port of LA. Telarati has since confirmed the location as the Port of LA, in a temporary tent just north of the future home of BFR production.

On April 19th, the Los Angeles Board of Harbor Commissioners approved a potential 30 year lease for SpaceX in the Port of LA. SpaceX would lease Berth 240, a relatively small plot of land that has been abandonded due to environmental contamination. SpaceX is getting a great deal, with the yearly rent set at $1,381,441 per year. This can be offset by up to $44.1 million in improvements to the site. This means construction and environmental remediation can be deducted as rent, sweetening the deal for SpaceX.

There are several reasons for selecting this location. First off, it is relatively close to Hawthorne and SpaceX's existing manufacturing base. Convinving hundreds of engineers to uproot themselves and their families to work at a new factory in Lousiana or Florida would have been difficult. While an estimated 700 new jobs will be created by the new factory, many existing SpaceX employees will be working there for the forseeable future.

The second advantage of this waterfront property is the ease of transporation. The original ITS plan included using NASA's Michoud Assembly Facility for construction of the massive 12m rocket or a new factory close to the launch site in Florida. At IAC 2017, Elon Musk scaled the vehicle down to 9m since that is what would fit in their existing factory. However, neither of these diameters are road transportable. Falcon 9, at 3.7m, is close to the maximum diameter that can fit under most US highway bridges. Moving large loads from Hawthorne to the Port of LA is possible, but expensive. The Space Shuttle Endeavour made a similar journey from LAX to its home at the California Science Center in 2012 at a cost close to $10 million. By building a waterfront location, large components can be barged in directly to the factory and finished BFRs can be shipped to launch sites on the other side of the country.

The full lease can be read here.

At Ted 2018, Gwynne Shotwell talked about many SpaceX projects, including showing an updated video on BFR. Before the video of the talk was released to the public, attendees mentioned the BFR looked bigger in the new video compared to the one shown at IAC 2017.

Possibly both according to this pic.twitter.com/VWR4L6Kpez

This stretch was confirmed by Elon via twitter. It is interesting to see the design of BFR evolve as it gets closer to production. With tooling ordered and delivered to the Port of LA, the 9m diameter appears to be locked in. However, length is a variable that could be changed quite significantly as development progresses. On the show we speculate whether SpaceX encountered issues with BFS dry mass, necessitating increased volume for fuel, or whether SpaceX is going for the title of world's tallest rocket, as well as most powerful. The unveiled BFR design is 106m , while Saturn V was 111m tall. SLS Block 2, the largest version of the rocket is aiming for 111.25m, just barely taller than the Saturn V. A relatively small increase in overall length of BFR would let it claim this mostly psycological accolade.

This is gonna sound crazy, but …

And then land on a bouncy house

We already do targeted retro burn to a specific point in Pacific w no islands or ships, so upper stage doesn’t become a dead satellite. Need to retarget closer to shore & position catcher ship like Mr Steven.

Yeah, exactly! Would be great to hear your thoughts. We’re going to try a few approaches. Can def be done, just about minimizing mass.

Yeah, but great for creating a giant object that retains its shape across all Mach regimes & drops ballistic coefficient by 2 orders of magnitude

Rather unexpectedly, Elon Musk announced a new plan to recover the second stage of the Falcon 9 rocket. SpaceX has mastered propulsive recovery of the first stage of the rocket, and continues tests of recovering the payload fairings at sea using guided parachutes. This makes the second stage an increasingly expensive component to throw away. 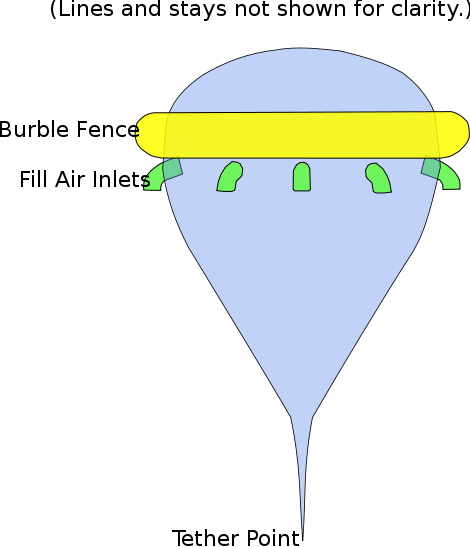 > Most traditional ballute designs are self inflating, using the falling motion of the object to force air into the ballute. However, helium will be used to inflate the balloon at high altitudes in order to safely re-enter. [Source: Wikipedia](https://en.wikipedia.org/wiki/Ballute#/media/File:20110430_BurbleFence_000.svg)

The plan calls for a helium-filled ballute to be deployed by the second stage after its deorbit burn. The goal is to dramatically increase the surface area of the re-entering second stage, without significantly increasing the mass and thus kinetic energy of the stage. By increasing the surface area, peak heating and acceleration on the whole craft may be reduced to return the stage intact without using fuel.

Using expandable or inflatable heat shields is not a new idea. NASA's Hypersonic Inflatable Aerodynamic Decelerator (HIAD) project has been ongoing for years. The HAID test articles were built by Janicki as part of the Low Density Supersonic Decelerator program. That is the same company that built the 12m test cryogenic tank for SpaceX in 2016. United Launch Alliance plans to use a HIAD/LDSD as part of the SMART reuse plan, to protect the engine section from aerodynamic heating before being snatched out of the sky by a helicopter.

More info on ballistic coefficients and their effect on spacecraft

Check out the full episode above for more in-depth discussion on the topics listed here.

What is Hyperspectral Imaging?

Linkspace: A rather familiar reusable rocket