“Rivalry is the best rocket fuel.” How billionaire entrepreneurs are driving the next space race.

This week on SPEXcast we sat down with Christian Davenport of the Washington Post to talk about his new book, The Space Barons: Elon Musk, Jeff Bezos, and the Quest to Colonize the Cosmos. Chris joined the Post in 2000 and has reported on the defense and space industries for the last five years. His book is the culmination of years of reporting on the space companies created by Elon Musk, Jeff Bezos, and Richard Branson, and their role in transforming the business of modern spaceflight.

If you’ve listened to past episodes of SPEXcast you may have heard a few discussions on stories broken by Davenport, like the announcement of Blue Origin’s Blue Moon concept and New Glenn heavy lift rocket. In his book, Chris pairs a number of interviews and anecdotes with the context from his years of reporting into an illustrative narrative on the origins and visions for the future of SpaceX, Blue Origin, and the space industry as a whole.

This past weekend, Chris agreed to share a few of these stories with us and how the rivalries among these “Space Barons” are driving the industry forward. In this article I've included a preview of our interview with Chris Davenport. You can check out the full interview as a podcast in the player below. We have included links to additional resources related to the conversation below.

What got you into writing about space?

Chris Davenport: I've been a reporter at the Washington Post for about 18 years. About five years ago I started covering the defense industry industry and that's when I got introduced to these space companies, and I've become sort of obsessed with space and the space industry.

SpaceX and Blue Origin were founded in 2002 and 2000, respectively, and today seems like an inflection point in their progress toward space exploration. What makes now the time to tell their stories?

Davenport: It's such an interesting time. We're moving a point where we're about to fly humans again. If you look back the last five years there's been so much going on [in the space industry]... I was writing like crazy for the Washington Post and thinking, there's something bigger here that transcends the daily news. That's what I wanted to do in the book. A lot of the book looks back at Jeff and Elon in particular, also Richard Branson and Paul Allen, and explains where they come from, what their ideas are, what they want to accomplish, how they got there, the culture and ethos of their companies, and what brings them to their visions. In some ways they are really similar, and in some ways they are really different. As to why now, it's like we're watching the Wright brothers in a way. Even though we're in the early days of this new space era, I wanted to document that to have something we can look back on. I really do think that twenty or thirty years from now we will see this as something historic.

You broke the Blue Origin Blue Moon story in early 2017. At the time, NASA was headed to Mars, and it seemed like a pipe dream. A year later, and not only has SpaceX announced Grey Dragon and shown BFR rendering on the moon, but NASA has also pivoted to the Lunar Orbiting Platform Gateway. Are you surprised by the rapid transition in end goal? Do you think it will be achieved, unlike prior goals towards the Moon and Mars?

Davenport: As for whether I was surprised, I would say no. NASA never got the funding from Congress, there have been shifts in administration to administration... Mars seemed like such a long term horizon goal. The moon makes a lot more logical sense to a lot of people as a stepping stone. So SpaceX and Blue are going to take their cues from NASA, who they hope to be their customer. As to whether it is feasible, we'll see. It still takes an enormous about of money even if it's more realistic than going to Mars. But the White House's approach seems to be, "we can't do this alone. We need to partner with industry to do it." For Blue Moon, Jeff Bezos had said they wanted to partner with NASA to build a lander with technology from New Shepard. But Jeff was very clear in saying he was willing self-fund a lot of it, meaning [Blue Origin] would provide some of the resources that NASA just doesn't have. And you hear SpaceX talking about wanting a COTS program, a private-public partnership program, but for deep space like going to the Moon. So is it feasible? We'll have to see where the resources are. Let's note too, the big guys are interested in this too. You've got Lockheed Martin and Orion, Boeing runs the International Space Station but I know they're very interested in a Lunar Outpost or Gateway, you could see maybe ULA launching Blue Moon's lander... So I think once you put all those together it seems perhaps more real than previous efforts, but we'll see.

An apparent rivalry between Bezos and Musk has developed in popular culture, and this is also somewhat reinforced by your book. Is it a space race?

Davenport: In some ways, yeah--we've got space races all over the place. I focus in the book on Elon and Jeff (SpaceX and Blue Origin), but you've got SpaceX and United Launch Alliance--that's a huge rivalry and a huge competition for national security launches; there's a race now between SpaceX and Boeing for Commercial Crew--which one of these companies will launch humans from American soil for the first time since the Space Shuttle was retired in 2011; you've got Blue Origin with their New Glenn rocket--they've said they want to compete for national security launches as well; and there's a budding rivalry between Blue Origin and Virgin Galactic for suborbital tourist flights. There are races all over the place. This is a good thing. When you have single providers and no competition, you don't go anywhere, you don't innovate. What got us to the Moon was the race with the Soviet Union. I have a line in the book, "Rivalry is the best rocket fuel." Elon told me in my interview for the book, "If I had a button that I could press to make Blue Origin go away, I would not press that button." It's good to have a rivalry even if at times it gets personal. It's only going to make them more efficient. I think it's good for the whole industry.

What can you tell us about the relationship between these two entrepreneurs? Is this rivalry something that emerges from competition in a market or is it more personal?

Yeah, there is a rivalry there, and it goes back some time. They're so different in their approaches and personalities... but if you look at the rocket landings [in late 2015], Elon went on this rant and it got pretty heated. Then if you remember in December 2015 when SpaceX landed their booster, Jeff tweeted "Welcome to the club." But it extended even earlier. But while competition is good, the media just eats [the drama] up. Lately we've seen them dial it back a little.

Rocket science is a very technical topic and exciting in its own right, as we learned from John D Clark’s “Ignition”. Why choose to focus on the people rather than the businesses and technologies that they are developing?

Davenport: I come to this as a journalist and not an engineer. I'm drawn into the characters and human beings and the stories. And these guys are such great characters with their outsized visions and personalities, but their backgrounds are really interesting. You know, Elon is so out there, but I think some of the more interesting stories are about Jeff. From [Bezos's] childhood, he's a huge Star Trek fan--his dog is named after a Star Trek character, the name of the company he used to buy up all the land in West Texas (which he did secretly) in the early 2000s was named Zefram, LLC after the Star Trek character that developed a super powerful engine--and it's funny because now he has sort of Gerard O'Neillian vision for space, being out among the stars. And he even today he jokes that Earth should be "zoned residential." And so in high school, at 17 or 18 giving his valedictorian speech he says, "Earth should be preserved as a national park." He's been talking this way for decades. He says that Amazon is a "lottery" for him in a way, and he's using his winnings to fund Blue Origin and to fund space because that means so much to him.

Listen to the SPEXcast episode 49 for our hour-long interview full of anecdotes, insights, and perspectives on SpaceX, Blue Origin, and the exciting stories of their billionaire founders.

Chris Davenport (@wapodavenport) reports on space and defense for the Washington Post. His new book, The Space Barons: Elon Musk, Jeff Bezos, and the Quest to Colonize the Cosmos, is available now on Amazon.

There are so many great anecdotes in this interview (even more in the book) that didn't make it into this summary. Should we do a SPEXcast Book Club series on this book? Let us know what you think on Twitter @RITSPEX!

We've included links to articles and tweets mentioned during our interview, plus additional information for you to dig deeper into this story. 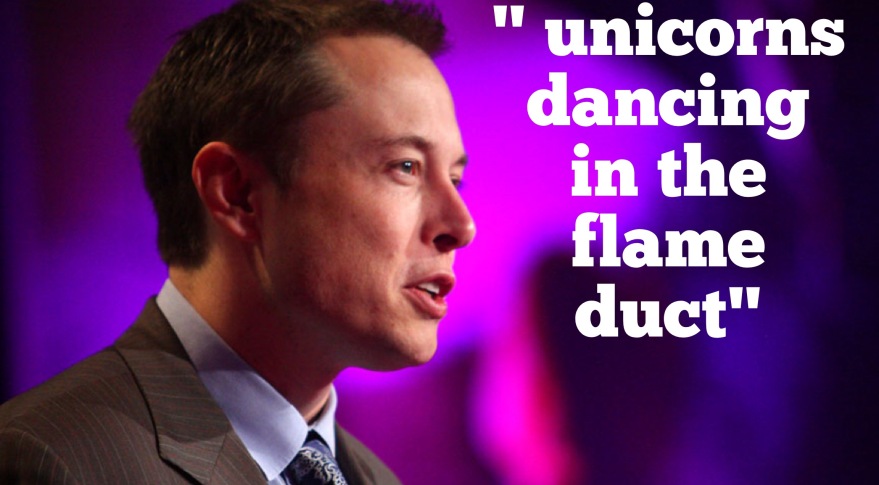 Elon Musk related the likeyhood of Blue Origin flying from Pad 39A to mythical creatures. Image and email from Spacenews.

One of the sources of tension between Blue Origin and SpaceX was the distinction between suborbital and orbital rocket booster landings.

Op-Ed: Why SpaceX should launch more cars into space, and do the other things