SpaceX will ferry a private citizen to lunar orbit, returning humans to the Moon for the first time since 1972

Late Thursday afternoon, SpaceX officially announced that it had "signed the world’s first private passenger to fly around the Moon aboard [their] BFR launch vehicle". The rocket company unveiled a new render of a modified Big Fucking Spaceship (BFS) orbiting the Moon and a link to check back Monday, September 17th, 2018 at 6pm PT for an official live-streamed announcement. What has changed with BFS since IAC 2017? Who is this mysterious private space tourist? How does this mission fit into the overall pivot towards the Moon that has been happening the past two years? We dive into all of those questions as we eagerly await the presentation Monday.

The new BFS render is significantly different than the render shown at IAC 2017 just one year ago.

The design for SpaceX's Mars rocket has gone through many changes since its first public unveiling at IAC 2016. The second stage, known as the Interplanetary Spaceship or Big Fucking Spaceship (BFS) originally included nine Raptor methalox engines: six with vacuum expansion nozzles, and three with sea level expansion nozzles. The Interplanetary Spaceship was a massive vehicle by itself, with a tank diameter of 12m and structural elements extending the vehicle to 17m across at its widest point. Overall the vessel could send up to 450 tons to the Martian surface with orbital refueling. 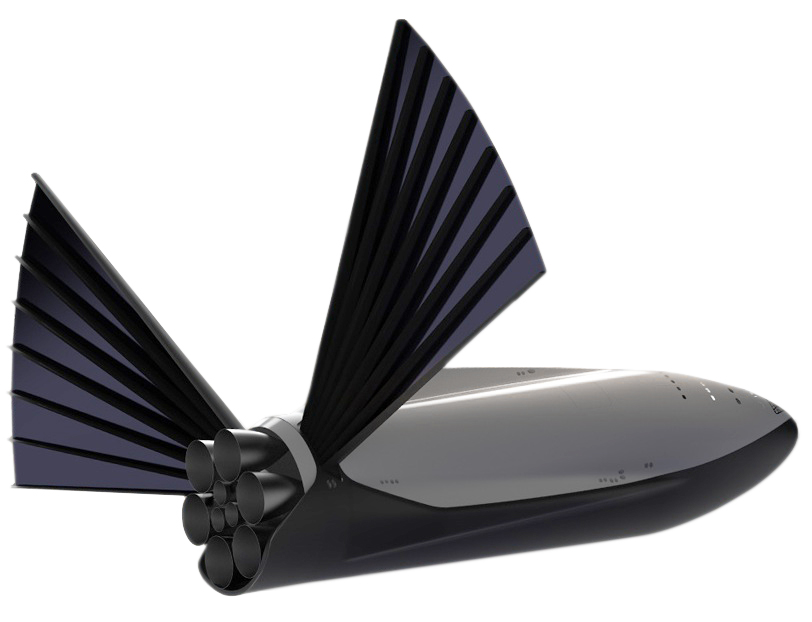 IAC 2017 brought a dose of reality to the design, scaling the vehicle from 12m to 9m, and reducing its raw payload capacity in exchange for a more realistic development timeline that could be executed solely by SpaceX without significant outside support. The new BFS reduced its payload to Mars surface to 150 tons and its landing leg protrusions became two distinct delta wing forms on either side of the vehicle. The number of Raptor engines was reduced to six: four vacuum optimized engines with two sea-level engines in the middle for Earth landing. Although, a few months later SpaceX appeared to update the design with a third sea-level engine for engine-out capability. The role and responsibility of BFS also changed. SpaceX unveiled their ambitious plan to enable point-to-point Earth travel in under 45 minutes using the BFR system, as well as a cargo variant of BFS that could launch or retrieve satellites. Confidence in some of these design decisions seems high, as SpaceX purchased 9m tooling earlier this year to begin airframe fabrication.

BFS: Heavy lift on the Moon, Mars, and Beyond 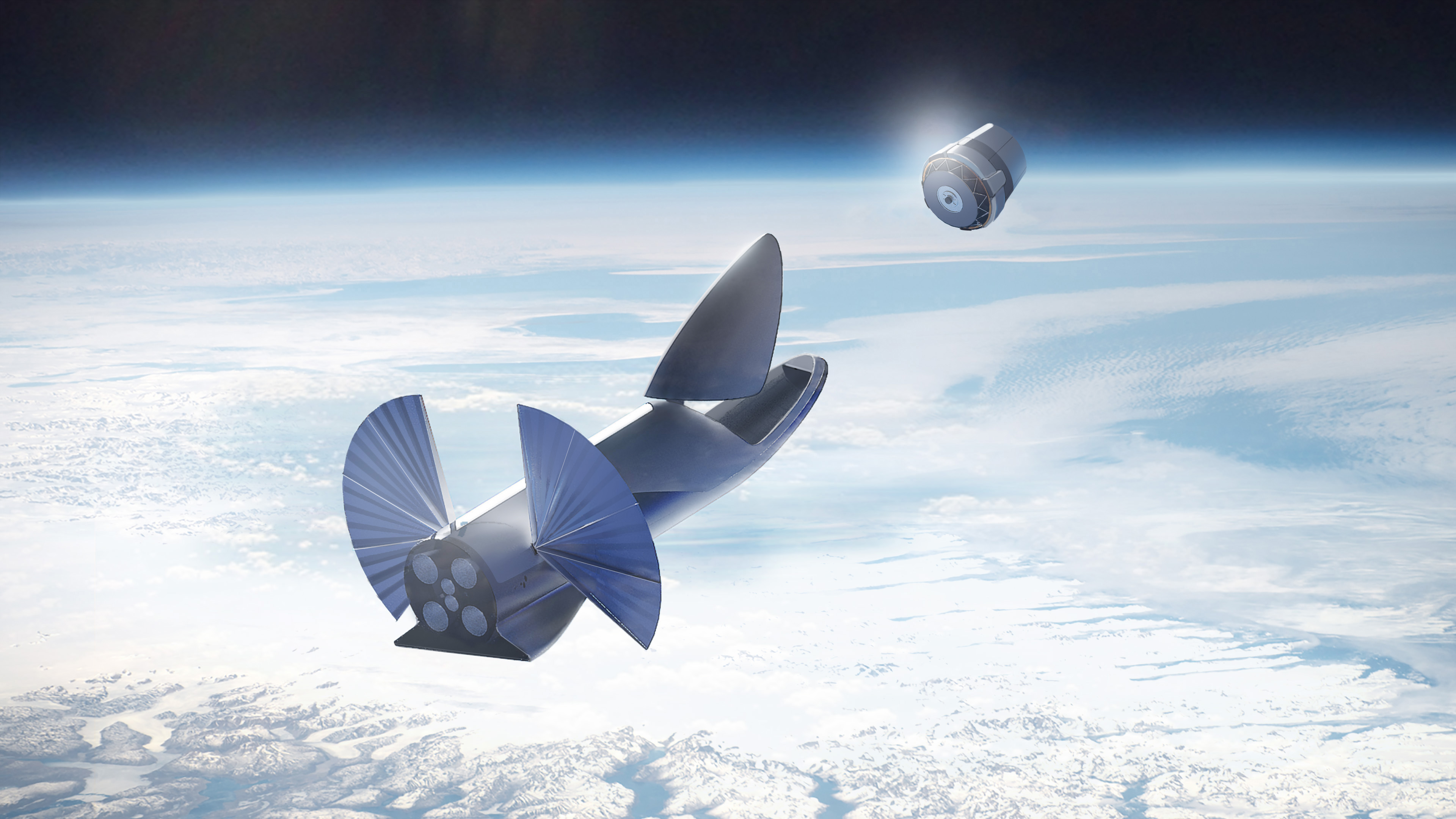 IAC 2017 renderings showed BFS launching satellites and delivering cargo to the surface of the Moon.

The new renders released today reveil a slew of changes to the BFS design. Most prominently is the dorsal fin on the 'top' of the vehicle, reminiscent of the vertical stabilizer on the Space Shuttle. The delta wings appear to have been shifted to a radial position around the craft and instead of ending level with the back of the vehicle, are slanted back extending beyond the engine bells. The tips of the wings look to have a cylindrical section which could house extendable leg mechanism. Examining the image further, it appears that the two 'side' wings are hinged and could potentially move into a different aerodynamic configuration for entry, descent, and landing on Mars or Earth.

On the front of the craft, is what appears to be another aerodynamic surface like the canard of a plane. These could provide additional control authority to the vehicle as it enters a planet's atmosphere and then performs a 'flip' for a retro propulsive landing. There are an abundance of smaller windows, potentially one for each cabin, and a large window that appears to be reinforced with the carbon fiber structure in the very front.

The standout change, however, is in the engine section where seven Raptor engines are shown, with nozzles that appear optimized for sea level operation rather than vacuum, based solely on apparent diameter. The panels on the outside of the engine bay could potentially actuate inward to create a single “vacuum engine” as larger bell nozzles work much better in vacuum. If true, this could dramatically simplify the manufacturing of the BFS because they would only need to manufacture a single type of Raptor engine, rather than previous designs which included multiple vacuum and sea-level engines. This engine bay also appears to sport a new heat shield, with engine inserts that may dramatically improve reusability and manufacturability because it may enable rapid swapping of engines.

The Space Transportation System, more commonly known as the Space Shuttle, was the first partially reusable orbital rocket system. The shuttle used an expendable external fuel tank and refurbishable solid rocket boosters. The orbiter itself featured the Space Shuttle Main Engines, and the Orbital Manuevering System pods and brought back these expensive components via an unpowered gliding landing on a runway. For a variety of reasons, the shuttle could not maintain a high flight rate or significantly reduce costs via reuse. In December 2015, SpaceX successfully landed its first Falcon 9 first stage booster. Their reuse architecture differs significantly, instead using Merlin engines to fly the booster back to the launch site and land propulsively rather than on a runway.

When ITS and BFR were initially pitched, SpaceX planned to use retropropulsion like the Falcon 9 system, but scaled up to a much larger rocket. At the BFR presentation in 2017, SpaceX unveiled the entry profile for BFS which included a flip from aerodynamic entry to retro propulsive landing. Using aerodynamic lift and drag can reduce the propellant needed to softly land the vehicle, and can provide lower G-loading to the crew over a longer period of time, but it increases the complexity of the airframe. These new renders with hinged wings and additional aerodynamic surfaces represent another shift away from the proven mechanics of Falcon 9 reuse and could mean increased development risk and complexity.

BFS called for active aerodynamic and propulsive modes during entry, in order to save fuel.

This is not the first time SpaceX has announced plans to send humans around the Moon. On February 27th, 2017, SpaceX announced that it would launch two private citizens on a flight around the Moon by the end of 2018. Those plans were eventually canceled when SpaceX decided to not certify Falcon Heavy for human launches. The potential space tourists for Grey Dragon were never unveiled and it will be interesting to see if those original customers will now fly on BFS.

Grey Dragon and this newly announced BFS Moon mission are not the first PR-centric mission plans announced or executed by SpaceX. Earlier this year, SpaceX launched a Tesla Roadster beyond the orbit of Mars featuring a mannequin named Starman inside a SpaceX spacesuit. While the Falcon Heavy test flight was a success, and inspired thousands of viewers, an early plan to send a Dragon spacecraft to the surface of Mars, called Red Dragon was scrapped. When propulsive landing development was removed from Crew Dragon, SpaceX redirected those resources to BFR, a vehicle that could deliver useful payload to the Martian surface. With that context, skepticism over any lunar tourism plan is expected.

Check out SPEXcast's initial reactions to Grey Dragon from 2017!

The Pivot to the Moon

This mission, as well as its predecessor Grey Dragon, are all part of a larger industry shift towards the Moon started in 2017. NASA's Journey to Mars was disbanded, and a Lunar Gateway is now in the works to provide a scientific outpost and commercial cargo destination in orbit around the Moon. Blue Origin unveiled their Blue Moon concept lander to deliver cargo to the lunar surface and recently won contracts to develop the sensors to autonomously land on the Moon.

While political focus has once again shifted to the Moon, many are quick to point out than any lunar activity will be retracing old footsteps in the lunar regolith, rather than exploring new worlds like Mars and beyond. Even SpaceX recognized this in their announcement tweet.

Only 24 humans have been to the Moon in history. No one has visited since the last Apollo mission in 1972. https://t.co/gtC39uBC7z

This refers to Apollo 8, 11, 12, 13, 14, 15, 16, and 17 which carried three astronauts each to the orbit of the Moon. Only 12 of them landed on its surface. Apollo 8 launched 50 years ago, and this mission would be replicating their achievement, hopefully on a bigger scale.

What do we hope to learn Monday?

This announcement has created a whole host of questions we hope to find answers to next week. Who else will be going on this journey? Elon Musk gave a potential hint at the nationality of the tourist

Even then, will SpaceX engineers or NASA astronauts tag along as support? BFS could quadruple that historic number in a single flight, with a theoretical maximum crew capacity of 100. It is unlikely to be that high, but an expedition of 5-10 people could happen. Another outstanding question is what test flights will happen before a manned trip around the Moon and when they will fly. SpaceX has repeated their hope for suborbital flights of BFS as early as the end of 2019. Any launch into lunar orbit would require the full BFR booster as well. This puts the timeline close to 2020-2021 at the earliest.

Since the BFS design has changed substantially, will we see updated renders of the BFR? The new engine configuration of BFS is particularly interesting, and redditors are wondering if the new system is actually a mechanically extensible nozzle. The RL-10B uses this configuration to store a larger nozzle within the interstage of the launch vehicle. On BFS, this could be used to improve efficiency in deep space, while retaining power and stability for atmospheric propulsion. However, in the render, BFS is shown executing a burn in vacuum, without any nozzle extension visible.

Another question is how orbital refueling will work with the radially attached wings. The IAC 2017 render showed a back-to-back docking sequence with small valves in each wing transferring fuel. Will this method continue to be used or could a side dock approach like the ITS render be used?
And finally, how was performance changed as additional dry mass is incorporated as aerodynamic surfaces, and engine layouts continue to be refined?

Check back Monday for SPEXcast Reactions!

We will be watching the livestream on Monday, and recording our thoughts after the stream. Make sure you subscribe to our podcast and blog for analysis and coverage of all the BFR announcements next Monday.