This week on SPEXcast we dive into the scientific instruments that drive new discoveries. NASA’s Development and Advancement of Lunar Instrumentation (DALI) selected 5 finalist projects for continued development. From neutron generators that can determine the composition of planets to lasers that can determine how old our solar system is, these new instruments promise exciting scientific potential if and when they fly on spacecraft in the future. NASA also selected the Atmospheric Waves Experiment as part of NASA’s heliophysics explorers program, which will go to the ISS to expand our understanding of airglow in Earth’s atmosphere.

NASA's Development and Advancement of Lunar Instrumentation (DALI) program is meant to create new sensors and scientific technology for lunar missions. Lower cost, smaller, and more accurate sensors allow for more science to be done, cheapily. NASA is also looking at new ways to send these sensors to the lunar surface via the Commercial Lunar Payload Delivery Service program. Both of these programs represent NASA's renewed focus on the Moon as a proving ground for new technologies and capabilities. 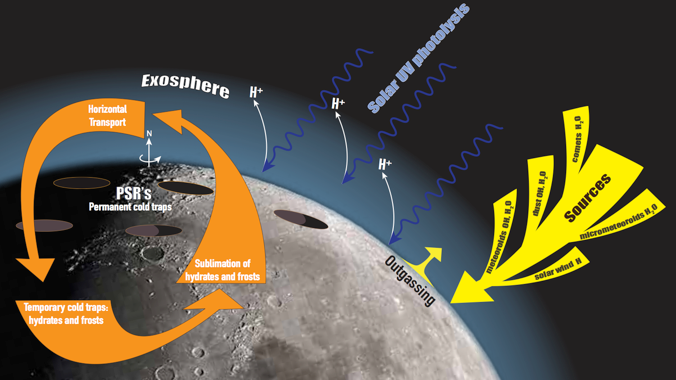 Most people think of the Moon as a dry, airless place, but that is not entirely true. A faint atmosphere surrounds the Moon and water exists in many forms inside craters and minerals across the moon. The Submillimeter Solar Observation Lunar Volatiles Experiment (SSOLVE) instrument is designed to measure how that water moves from the surface of the Moon into its thin atmosphere over the course of a lunar day, in effect, measuring the water cycle on the Moon.

SSOLVE proposes a nominal 14 day mission where a heliostat uses sunlight and a spectrometer to measure water, HO, and heavy water in the thin lunar atmosphere during the lunar water cycle. The lunar water cycle is the gradual process that moves water across the Moon's surface. Water is introduced to the Moon via multiple sources including micrometeoroids, solar wind, and water locked into mineral hydrates. Water bakes out during the 14 Earth-day lunar day and moves through the atmosphere, where it eventually lands in shadowed areas of the lunar surface. 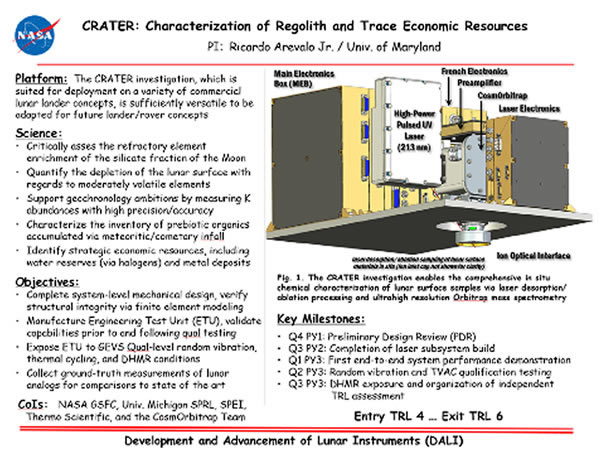 CRATER enables detailed analysis of materials without the need for sample return. Source: NASA
A continuing question for space scientists is determining if conditions for life are present beyond Earth. The Characterization of Regolith and Trace Economic Resources (CRATER) instrument intends to provide extremely accurate measurements of organic compounds and other materials in situ, without requiring sample return missions which add cost and years of additional time to missions. 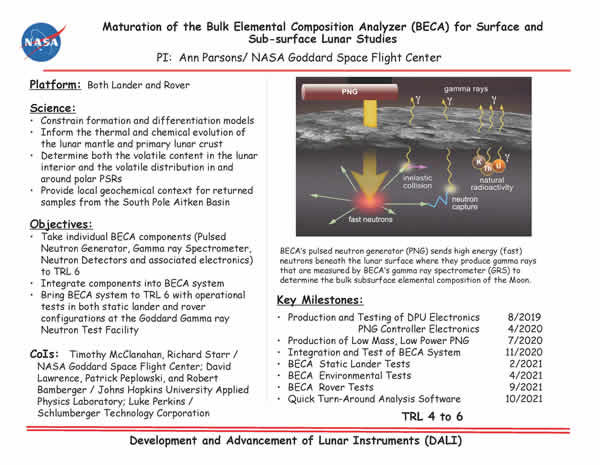 A neutron generator allows for larger volumes of material to be observed from a short distance away. Source: NASA

Sometimes targeted sampling and analysis of rocks on a planetary body just isn’t enough. The Bulk Elemental Composition Analyzer (BECA) is designed to measure the overall composition of a planetary body, including the surface and subsurface using fast neutrons and gamma rays. The device is made up of a neutron generation source and a gamma ray detector. Neutrons interact with different materials in unique ways, and by measuring the types, volume, and energy of the gamma rays emitted by the material, the sensor can determine the composition of the target remotely. BECA reuses technology developed for the oil industry. Scientists plan to modify the detector and sensor algorithms to detect different materials that are more relevant to space exploration versus oil discovery.

Radioactive dating has been a boon for geologists on Earth, but so far it has required sample returns to use the same processes for astrogeology.(KArLE) or the Potassium-Argon Laser Experiment is designed to make radioactive dating portable enough to do these measurements in space, expanding the number of opportunities scientists have to understand the age of the solar system. Radioactive dating works by comparing the ratios of an initial product and its decay product. Given the half life of the initial product, a rough estimate of the age of the sample can be determined. KArle leverages a laser vaporization system with optical imaging to collect a sample for analysis. The camera is used to determine the volume of gas produced, which is key in determining the proportion of radioactive byproducts. By precisely knowing the age of specific samples, scientists are better able to determine how the solar system formed and how geological processes work on a solar system scale. Currently scientists use crater counting on the lunar surface, assuming areas of high impact are older materials.

Miniaturization in space technology, led by CubeSat development, allows for even more sensors to be packed into smaller spacecraft. Source: NASA

NASA has sent a number of experiments to the lunar surface already, but with the Lunar Environment Monitoring Station (LEMS), they will collect data over the course of 2 years -- the longest lunar surface mission ever -- to collect data on long term trends within the Moon’s exosphere, micrometeorite dust, and seismic events.Long term observations on the lunar surface is important because data trends improve the certainty of observations and are resistant to temporal fluctuations in sensor readings. While LEMS proposal includes multiple sensor designs, it is possible a similar compact lander may be flown with other instruments described in this article. The robust market for small satellites in LEO has led to the miniaturization of space hardware and proving that hardware with extensive flight heritage. Now it can be applied beyond LEO in applications like LEMS and MarCO, which sent CubeSats past Mars last year.

The last two missions we’ll take a look at today are closer to home. These missions were selected by the NASA Heliophysics Explorer Program to continue on in their development.

Miniaturization in space technology, led by CubeSat development, allows for even more sensors to be packed into smaller spacecraft. Source: NASA

The first solar weather experiment is called the Atmospheric Waves Experiment (AWE).
Recent research investigating changes observed in radio and GPS interference in the upper atmosphere have shown that solar variability alone can’t explain trends that have been observed, so Earth’s weather must also play a role.AWE will investigate how waves in the lower atmosphere, caused by variations in the densities of different packets of air, impact the upper atmosphere. AWE will look at a phenomenon in Earth’s atmosphere called “airglow”. Even without any sunlight, moonlight, or light pollution, the night sky will never be truly dark . Airglow is caused by molecules in the atmosphere emitting light during reactions with each other.
During the day these reactions are kicked off by the Sun’s UV light, like the reactions that form Ozone. These reactions emit light during the process.
The chain reactions continue into the night as the molecules react and bump into each other.

Variations in air pressure in the upper atmosphere cause “gravity waves” that appear as ripples in the airglow. This is what AWE will measure. AWE will use an infrared telescope to measure airglow, specifically from OH emissions at 87 km up (the mesopause, or the top boundary of the mesosphere). This will get get high-resolution measurements of the temperature, momentum, and energy fluxes of atmospheric waves driving the Ionosphere-Thermosphere from below. This $42 million mission is planned to launch in August 2022 where it will be attached to the exterior of the Earth-orbiting International Space Station. 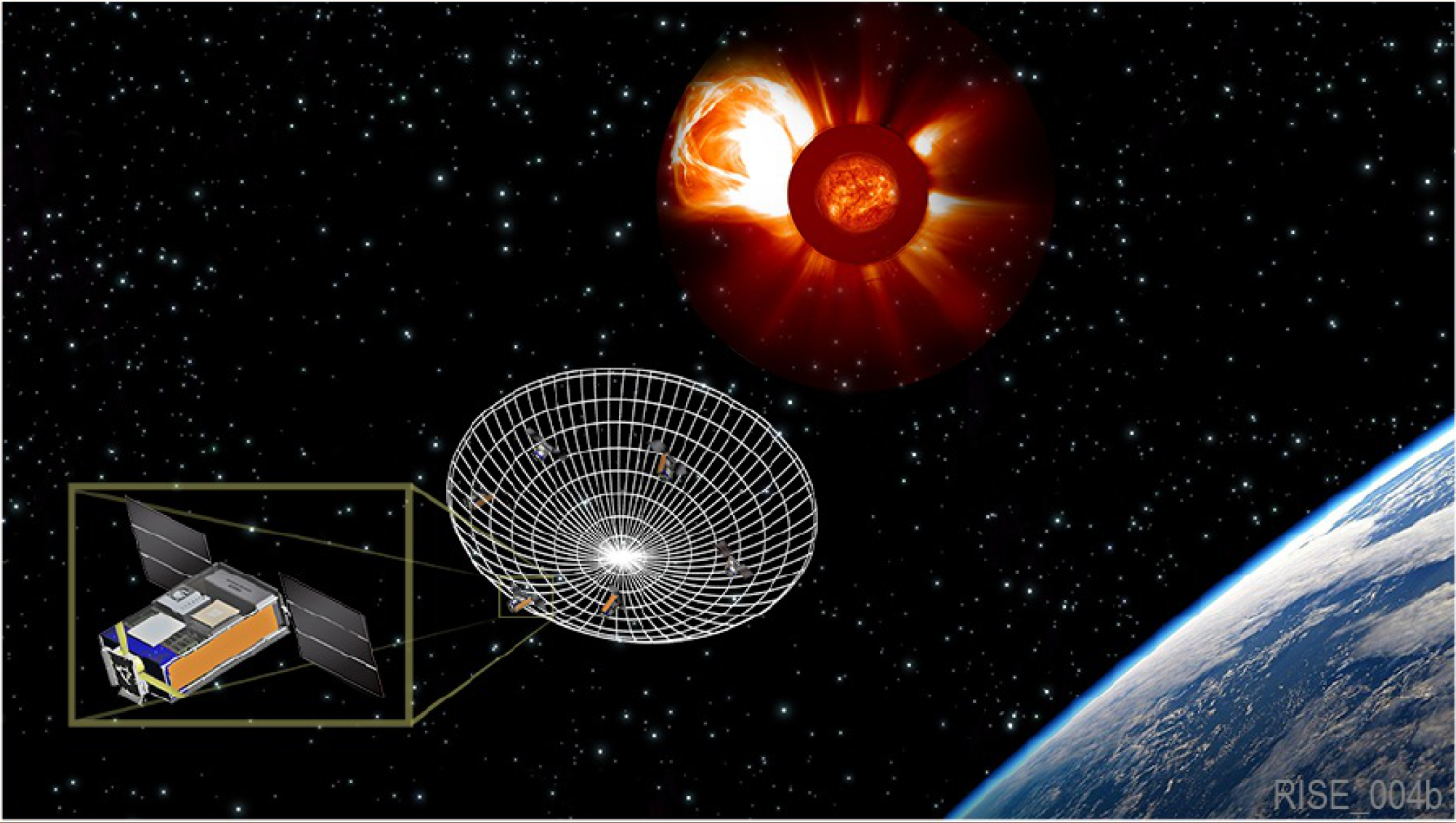 This next mission is only a concept, but the Explorers program selected it for further study (because it’s awesome). Sun Radio Interferometer Space Experiment (SunRISE) is a synthetic radio antenna composed of six cubesats working together as a space-based interferometer. SunRISE aims to measure the acceleration and transport of Solar Energetic Particles with Medium and High Frequency radio observations
The first objective is to understand where the SEPs come from when a CME occurs, what the physics behind the accelerations are, and eventually to be able to predict the severity of SEP accelerations given a particular CME. The idea is to measure the location and distribution of Type II radio emission. Investigators would like to observe at least 1 Type II radiation burst but ideally two, and they give it a 99% chance to observe two events](https://digitalcommons.usu.edu/cgi/viewcontent.cgi?referer=https://www.google.com/&httpsredir=1&article=3662&context=smallsat) within 6 months.

The second objective is to test a hypothesis that the wide longitudinal width of some CMEs is due to a broad magnetic connection between areas of interplanetary space. The idea for this one is to measure Type III radio burst events (which are much more common than Type II). To make the right measurements, they need to take data from multiple points over a 12km circular area. Instead of building a 12km long antenna, this mission aims to use 6 identical 6U CubeSats spread out at different points within the area. Pairs of spacecraft create unique antennas (imagine a line drawn between them). Five spacecraft are needed to create enough unique antennas to measure all the free parameters of the physics models they aim to test. The sixth spacecraft would be there for redundancy. Each sat would downlink its own data, and the data bearing fruit for scientists studying Type II and Type III radio bursts would come out of post-processing the data from all satellites on the ground. (The CubeSats aren’t talking to each other). The authors describe each spacecraft as a cross between MarCO (Mars Cube One) and DHFR (the DARPA High Frequency Receiver experiment). We’ve talked about MarCO before, and DHFR is 3U cubesat experiment focused on HF receivers.
The antenna consisted of 4 members in a cross with each member made from a 3m tape measure in a spring loaded tip-roll device. The technology behind DHFR would be used to collect the radio data for the experiments, while a MarCO-inspired X-band radio would be used to downlink the data over the DSN. The CubeSats would need to use the DSN for downlink because they would be parked in the GEO graveyard orbit, which was selected because it’s above the ionosphere (which could cause interference with the radio observations) and is readily available for a rideshare orbit.

We don’t know when -- or if! -- this mission will launch. Right now the scientists won some additional funding from NASA for another round of development but no launch dates have been announced.