We sit down with JPL engineer Troy Hudson to talk about NASA's newest Mars lander, and the HP^3 sensor which will dig deeper into another planet than ever before.

Subscribe on iTunes, Google Play, or by RSS for more space exploration discussions. Cover Image: InSight on the surface of Mars, via NASA JPL

This week on SPEXcast, we sit down with Jet Propulsion Laboratory (JPL) engineer Troy Hudson to discuss NASA's Mars InSight mission. InSight is scheduled to launch May 5th from Vandenberg Air Force Base on its journey to the surface of Mars. We discuss several of the instruments on InSight and go into a deep dive on HP3, which Troy Hudson primarily worked on, including how the probe functions, its scientific objective, and the challenges of digging on another planet.

This is part one of our four part 'Mars May' series where we interview the engineers that make Mars exploration possible. You can check out part two, our coverage of MarCO, the twin cubesats traveling to Mars along with InSight here.

Gaining InSight into the Geophysical History of Mars

For an in-depth look at NASA's InSight mission, check out our 5,000+ word write-up on the mission, individual instruments. and its development cycle. As a high-level overview, the Interior Exploration
using Seismic Investigations, Geodesy and Heat Transport, or InSight, mission is a robotically-operated lander designed to monitor the physical properties of Mars more accurately than any mission sent before. It is heavily based on the Phoenix lander that arrived on Mars in 2008. InSight will be launched on an Atlas V 401 rocket from Vandenberg Air Force Base, the first interplanetary mission launched from the West Coast and will travel about 301 million miles (485 million km) to Mars before landing in Elysium Planitia to begin its nearly two year long mission.

Once on the surface InSight will deploy several scientific instruments including the Seismic Experiment for Interior Structure (SEIS), Rotation and Interior Structure Experiment (RISE) and Heat Flow and Physical Properties Package (HP3 ). Our guest Troy Hudson worked on HP3 as an Instrument Systems Engineer, working with the German Space Agency (DLR) who designed and built the instrument in partnership with JPL.

What is your personal story with the InSight mission? How did it get started and have you been with it since the beginning?
Troy Hudson: So my training is in planetary geology, but I primarily work in the field of instrument systems engineering. My primary role on inSight has been Instrument Systems Engineer for the HP3 instrument, the heat flow probe. My first job at JPL when I joined in May 2008, almost 10 years ago was a part of the Phoenix Mars lander which has a great deal of heritage with InSight. I joined just about three weeks before Phoenix landed, so I got to see all the exciting operations work, but I was only peripherally involved with the preparations work for Phoenix when I was still a grad student. Since then, I have worked on a number of proposals and R&D projects, including a stratospheric balloon project, but for the last seven or eight years I have been primarily focused on InSight.

What was one surprising discovery during the development of HP3?
Hudson: We wanted to test the Mole in a vacuum and it turns out for a very particular type of soil, which we don't expect to find on Mars, but we considered a worst-case scenario, the mole was not hammering. It would bounce, it wouldn't actually penetrate. We did a lot of investigations to figure out what was wrong. We took the mole to a special facility to take high-speed x-ray video, giving us a chance to see inside it. Everything looked fine. It turns out that in certain soils that are cohesive, that hold their shape much better than a loose sand would... the hammering would create a hole. The soil and the contact with the mole walls are a key component of the mole's activity. It hammered in this soil fine under atmospheric pressure but could not hammer under Mars pressure. When the mole starts to bounce back, the tip of the mole actually cavitates. Gas can permeate soil, but its not an instantaneous process. A vacuum would be created in the front. With an atmosphere, it would react with the back of the mole and that is enough force to move the mole forward and dig into the ground. In low pressure conditions, you don't have that force and the mole just bounces in place.

Why choose a hammer instead of something more conventional like a drill?
Hudson: For anything you are going to launch into space, you want to minimize mass and power. They are very precious and expensive resources. If you were going to launch something like a rotatary drill, which would pull soil particles up and eject them out as tailings, that is something you could do, you need something to react against. The platform would end up spinning. It was not practical in the sense of the total mass of the instrument and the total amount of power it could assume. The mole takes less than a watt of energy to pull back and hammer the mole, but its a very slow process. The motor pulls back over four seconds and releases in less than a 10th of a second. You're trading your energy inputted into the soil for time.

Insight is planned to operate for over two Earth years, while Phoenix only operated for five months. How does that impact the operations, spacecraft design, and the mission as a whole?
Hudson: Phoenix and InSight are both solar powered missions based on the same spacecraft bus. Phoenix landed in the polar regions of Mars, which meant it only had a few months of sunlight for it to stay alive and do its jobs. There was a very compressed timeline and sense of urgency to complete its activities. Since InSight's goal is to monitor things like Marsquakes for a very long period of time, the nominal mission is one Mars year or two Earth years. We chose the landing site for a variety of reasons, mostly engineering based. The seismometer doesn't really care where it is on the planet, and neither does HP3, so the landing site was primarily chosen based on engineering constraints. We wanted something with the right soil, low rock abundance, and a site near the equator which gives us enough solar power throughout the year. Mars does have seasons so the closer to the equator we are, the more power we have. We wanted a place with low-altitude, so the atmosphere is dense enough for the parachute to work. We want to land in an area that's not too windy, since you're on a parachute during final descent. There was a multi-year process where engineers and scientists evaluated the best landing sites.

Check out the full interview at the link at the top of the article. Our in-depth coverage of HP3 is below.

In order to characterize the geophysical properties of a planet's interior, more data is needed than seismic vibrations alone. One key measurement is the amount of thermal energy coming out of the planet. The variation in temperature with depth, or thermal gradient, is used to interpret seismic and other measurements in geophysical models. The amount of heat in the planet's interior is tied to the geological "engine" that drives tectonics and geological processes that make volcanoes and mountains.

But how can we measure the core temperature without putting a thermometer thousands of miles deep? Lucky for scientists, even though the temperature variation from solar irradiance day-to-day can swing tens or hundreds of degrees on the surface of Mars or the Moon, by digging just a few meters below the surface, weather and seasonal variations no longer significantly affect thermal measurements. With temperature readings at different depths from the surface to as shallow as 2 meters, even though the readings differ by a few degrees the data can be extrapolated and combined with other measurements and models to determine the thermal conductivity and internal structure of the entire planet.[1] Apollo 15 astronauts conducted this very experiment on the Moon in 1971 by taking temperature readings in lunar regolith at intervals up to 2 meters deep.[2]

InSight's Heat Flow and Physical Properties Package (HP3) is a clever system for measuring the heat flow of the Martian interior. Like SEIS, HP3 is separate from the main lander bus and is deployed by the Instrument Deployment System robotic arm. HP3 was designed and built by the German Space Agency (DLR) with help from NASA JPL.

The workhorse of HP3 is a torpedo-shaped "mole" that burrows into the soil. Inside the aluminum shell, the mole has a spring-loaded hammer assembly. Every three seconds the hammer is wound up and released, driving the mole down at a rate of only a couple millimeters at a time until the mole reach its maximum depth of up to 5 meters. HP3’s slow and methodical digging mechanism is optimized for weight and power limits on the spacecraft. 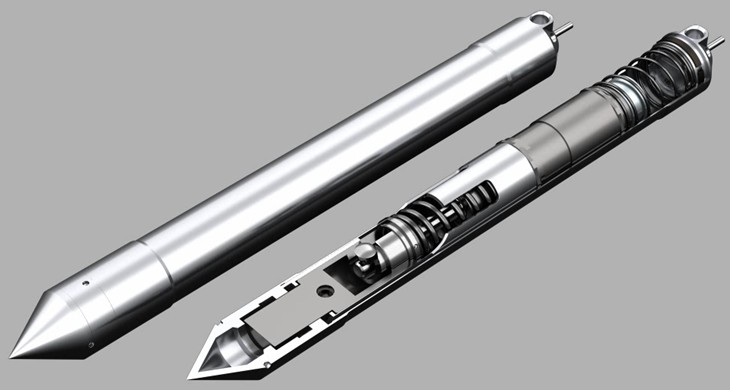 The mole "self-hammering-nail" architecture is better than a drill because it has a much less instantaneous power draw and does not require an applied downward force other than the pressure on its sidewalls from surrounding soil.

While descending, the mole will pause from digging every 50 cm to measure the soil's thermal conductivity. The probe waits through a cooldown period of 48 hours to dissipate heat that has accumulated due to friction while digging and to let the soil return to thermal equilibrium. Heaters inside the mole's hull are activated and thermal conductivity is measured using the self-heating curve for another 24 hours.[3] As dissipation of power in a resistor increases, the temperature of the resistor increases and causes a change in the resistance value. This effect is known as self-heating. The HP3 mole essentially uses Martian soil as a heat sink whose effectiveness is determined by its thermal conductivity. Careful modeling and calibrations of the mole's heater electronics and its own thermal characteristics allow thermal conductivity of the soil to be accurately measured.

The mole is connected to the HP3 base by a tether, which carries power and data cables to the probe. 14 platinum resistance thermometers are placed along the length of the tether to measure the temperature of the soil. The mole is likely to push small pebbles aside while digging, but in case the bored path is diverted by a rock, the mole has a tilt sensor on board so that the borehole can be reconstructed in a computer model to determine the true depth of the thermometers. Temperature sensors along the tether will record temperatures every hour for at least 400 sols and continue for the life of the mission.

Can't get enough of Troy Hudson? Check out the talk he gave at JPL earlier this detailing the InSight mission

SpaceX doubles down on Mars Timeline at Humans to Mars Summit